The auction house next June 21st Christie's in New York will be selling the Cartier in 18K gold belonged to Jacqueline Kennedy Onassis.

This iconic timepiece, which belonged to the best-known first lady in United States history, represents the spearhead of the annual sale New York Rare Watches and American Icons organized by the well-known auction house.

The clock - defined as "The Jacqueline Kennedy Onassis Cartier Tank”- it was given to Mrs. Kennedy by her brother-in-law Stanislaw“ Stas ”Radziwill and was probably one of her favorites, as evidenced by the numerous photos depicting her with the Cartier on her wrist.

The dial of the Tank bears the inscription France, indicating that the watch was probably purchased in the boutique Cartier of Paris. On the caseback of this piece of American history, the engraving "Stas to Jackie 23 Feb. 63 2:05 am to 9:35 pm.".

The watch was probably given to her on February 23, 1963; while the two times, 2.05 in the morning and 9.35 in the evening, indicate the beginning and the end of a 17-hour excursion in which the brother-in-law himself had taken part at the request of Jacqueline. 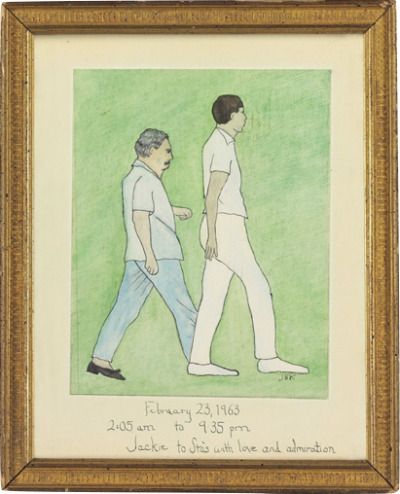 Life Magazine wrote an article on the "50-Mile Walk", in the photo Jackie's illustration of their walk in Palm Beach

This initiative, the 50-mile hike in the Palm Beach, had been wanted by the former first lady herself and was part of a campaign promoted by JFK to induce Americans to exercise, involving the same staff of the White House.

The day after Christie's auction in New York City, TMZ reported that the buyer of this watch was none other than Kim Kardashian.


There is no ads to display, Please add some

Founder | Watchmaking is a vocation for him. Moved by an authentic passion for the sector, he gave life to Perpetual Passion to inform and learn about haute horlogerie and the fascinating world that surrounds it. Last but not least, he is a certified watchmaker. Click Here To Email Me