This new edition of the Classique Double Tourbillon it's a visual upgrade and retains most of the technical attributes of its closed dial predecessors. The basic movement is identical, as are the functions, however, the execution is drastically different. Breguet showcases its technical and finishing expertise and, indeed, the Double Tourbillon 5345 it's an impressive piece. 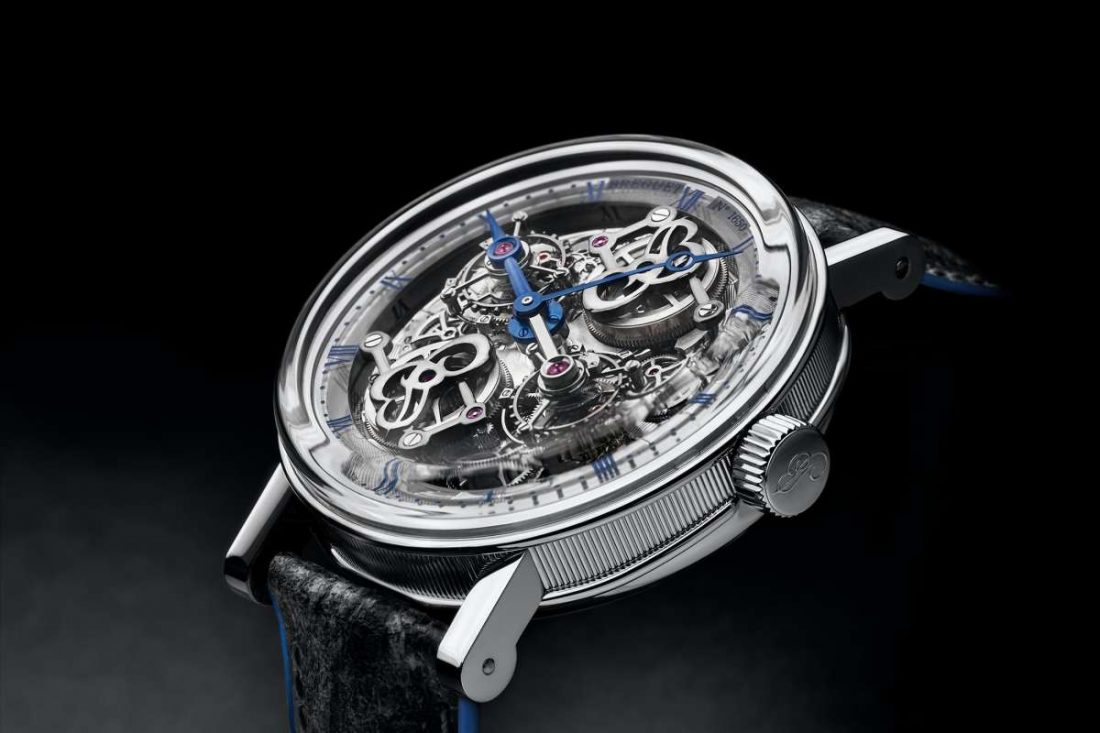 The case maintains the same dimensions as the previous editions, which means a diameter of 46 mm and a height of 16.8 mm. Made of platinum, it has a classic shape, with a finely fluted caseback, polished surfaces and lugs welded with screw bars. To visually lighten the timepiece, the watch is topped with a box-shaped sapphire crystal that encloses the top of the movement, allowing for an uncluttered view of the moving parts. There is no denying the visual impact of this watch and its size on the wrist. It is big and heavy. But it represents a flagship watch, capable of embodying the brand's savoir-faire. 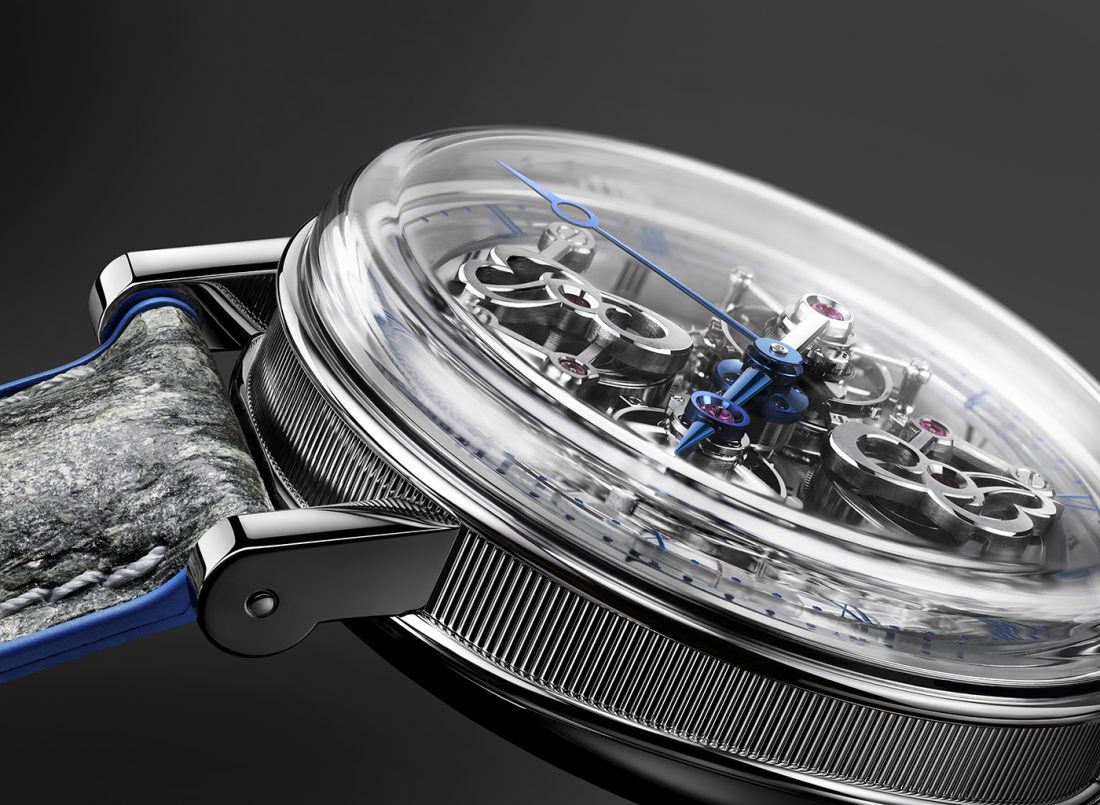 For this perforated edition, Breguet he opted for a rather unusual strap. The base is made of rubber (available in blue, black, red or orange) and on the top is a thin flexible layer of real slate stone, which gives a mineral appearance to the strap and forms a heterogeneous surface. It is secured by a triple folding buckle molded into the logo B of the brand. 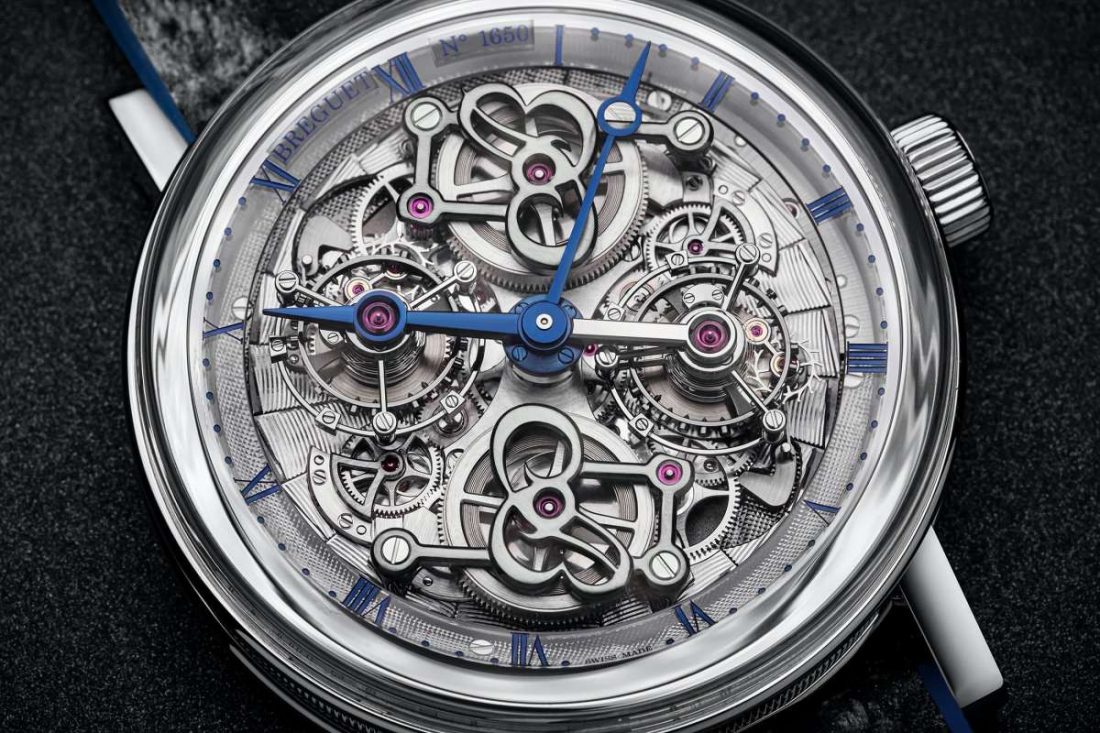 While all previous editions of the Breguet Classique Double Tourbillon featured a closed, often guilloché main plate that covered most of the movement - only two openings were made in the plate to reveal the tourbillon regulators - this new "Quai de l'Horloge”Reveals every single technical element of his superior movement. The dial, which was a real mechanical element, has been replaced by several perforated bridges, which hold the moving parts in place. 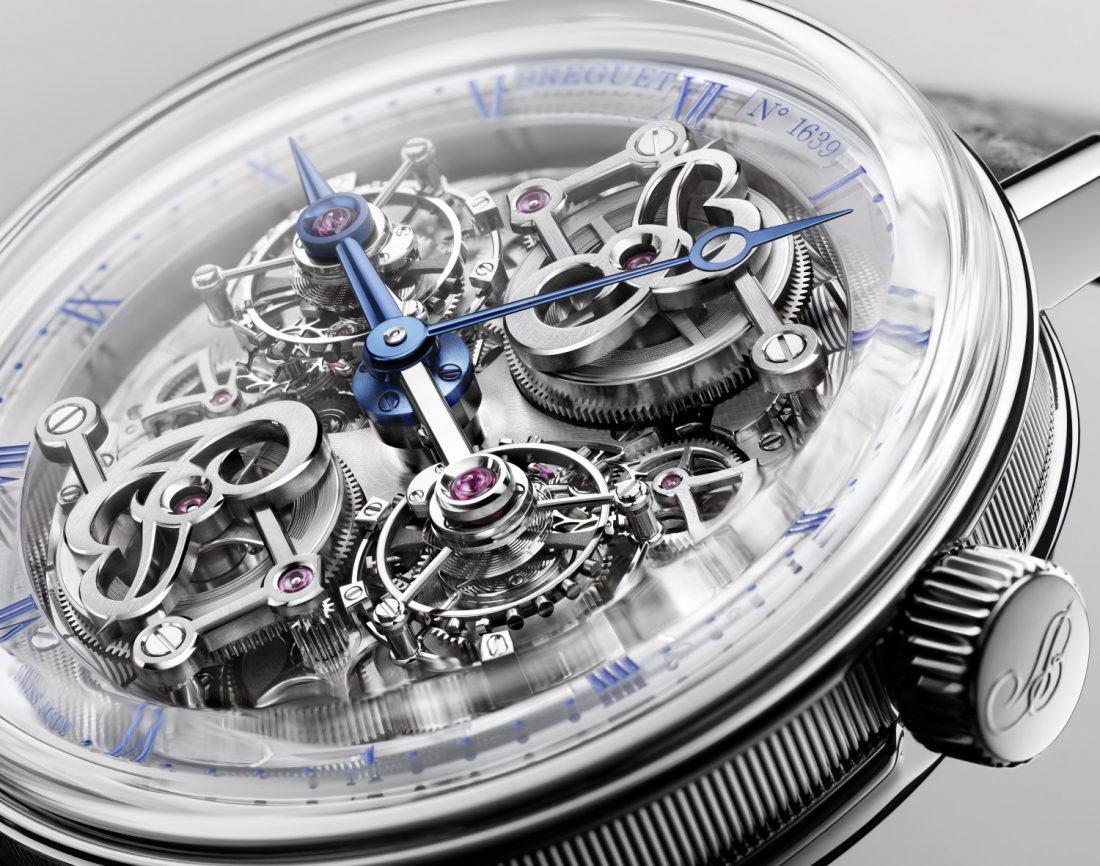 The dial is surrounded by an internal sapphire flange with blue printed Roman numerals to indicate the hours and minutes. The Roman numerals are also repeated inside the case, engraved on the internal flange to create a reflection effect. The base plate and bridge at the bottom of the dial are made of white gold, then hand-guilloched with a Clou de Paris or a fan pattern. New to this model, the steel barrel bridges take the shape of the letter B. These are hand decorated with anglage, straight veins and an anthracite coating to create contrast with the rest of the elements - a color that is also found on the scales, which are no longer gold.

As expected, all parts are finely hand finished with an impressive level of detail: hand applied corners, straight veins, polished slots and screws, satin parts, black gloss elements. Time is shown by the classic hands Breguet, in blued steel, with eccentric "month". And while the minute hand is classic, the hour hand is very unusual. It's actually a partially blued bridge to hold the two tourbillons in place, and it's connected to the center differential and, like it, rotates once every 12 hours. 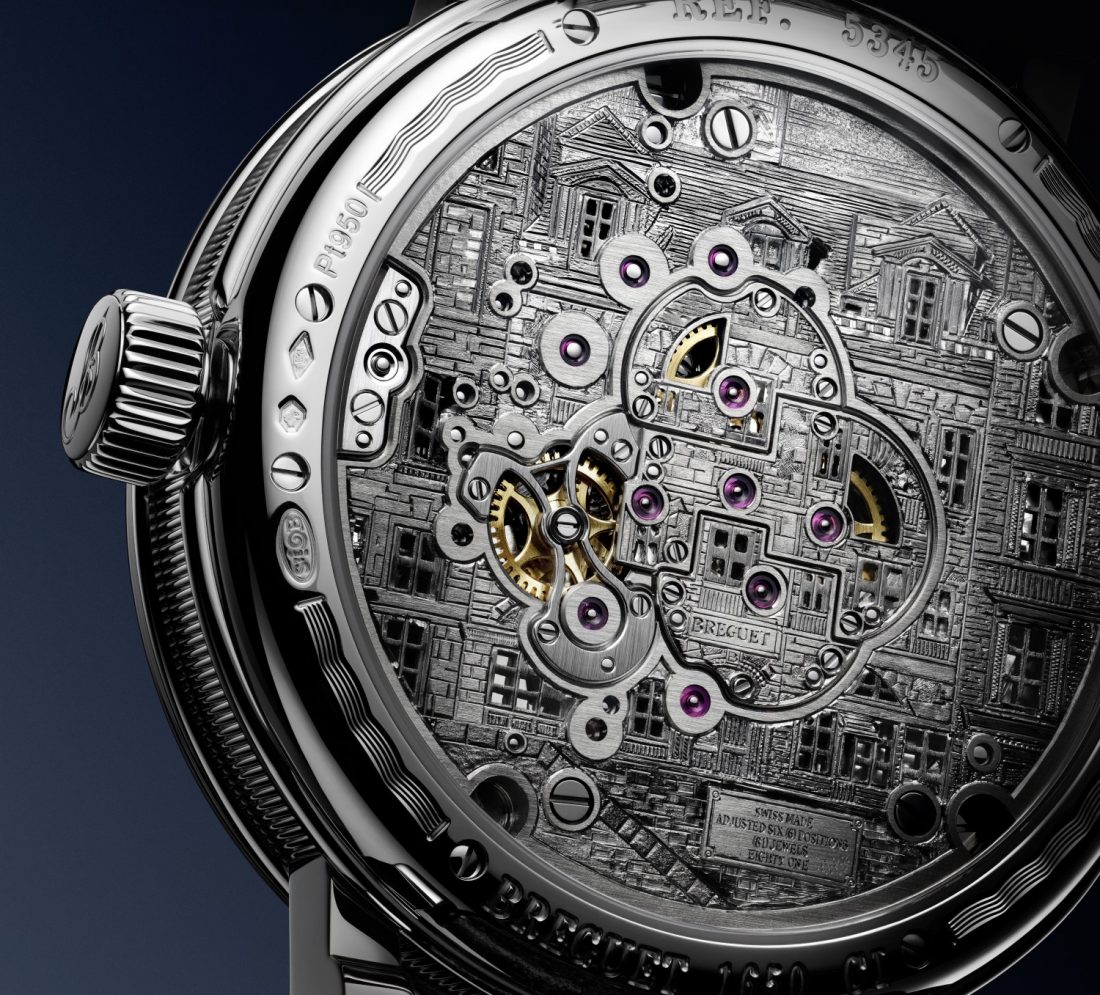 Consisting of four solid gold bridges, the back of the movement is entirely hand-engraved with the house's facade AL Breguet's house at 39 Quai de l'Horloge, Paris. This engraving is then coated in two different shades of gray to reveal the detail, but there are also windows that reveal the gold-colored wheels and jewels.

The heart of this watch, his caliber 588N. A hand-wound movement with no fewer than 738 components, including 81 jewels, this motor is very complex yet smart enough when it comes to technical solutions. 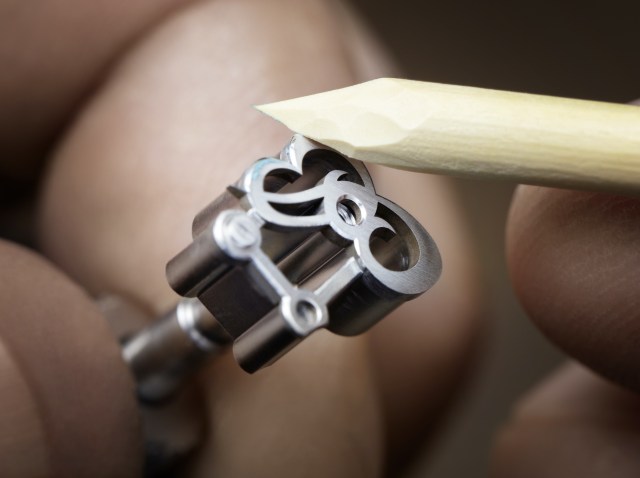 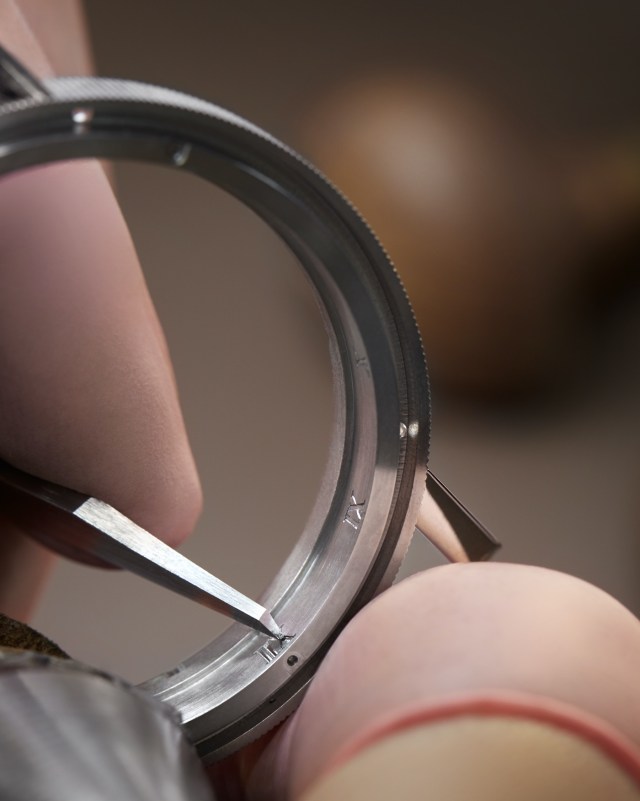 The idea is to undo two problems that can affect the performance of a watch. The former are positional errors, due to gravity: this is where the tourbillon comes into play. The latter are speed errors, and this is where it makes sense to use not one but two regulators, connected by a differential.

The watch is based on two independent secondary movements, each with its own independent barrel, its own gear train and its own regulating organ. The two mechanical hearts beat independently of each other. Each of them is a tourbillon, which means that each of them will not only regulate movement but also have the ability to counteract the effects of gravity and position errors. By being doubled, the effect is further enhanced. Each tourbillon is equipped with a steel hairspring with the characteristic curve at the end Breguet, which allows the concentric development of the spring. Each tourbillon operates at a frequency of 2.5 Hz (18.000 vibrations / hour) and has a monometallic balance wheel with gold screws, set in 6 positions.

Now, once you have these two independent regulators, you need to connect them to produce a single time display. This is the role of the center differential, positioned just below the axis of the hour hand. The two oscillating members are coupled to a second pair of wheels, which rotate around the central differential. This double entry mechanism is capable of determining the average speed of the tourbillons, allowing the swash plate to be set in motion at the speed of one full rotation every 12 hours, thus displaying the hours. If the tourbillons are here to mediate the effect of gravity, the differential is here to correct the velocity errors of each regulating organ and to average them to provide a more accurate display of time, the errors of one compensating for the errors of the other. 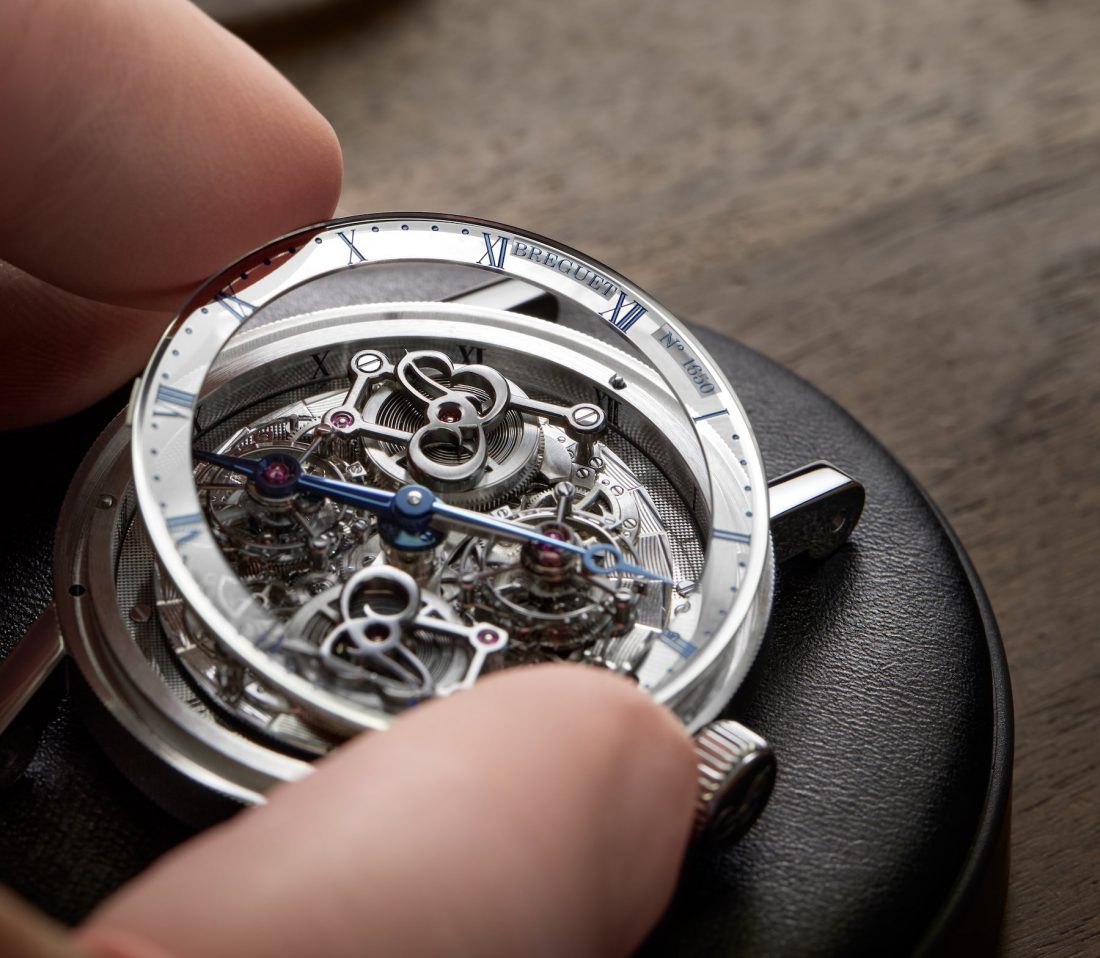 The movement itself can store up to 50 hours of energy when fully charged. One of the two barrels is equipped with a friction bridle, similar to those used on self-winding watches. This construction allows the spring to disengage once coiled, until the second barrel is fully wound. Finally, the crown employs a dynamometric safety system, which prevents excessive winding of the springs.

The Breguet Classique Double Tourbillon 5345 "Quai de l'Horloge”Is already available at selected boutiques and retailers. It is not a limited edition per se, but due to its highly complex nature, it will be produced in very limited quantities at the price of 628.000 Swiss francs.