First presented in 2018, the Horological Machine N°9 – nicknamed HM9 "Flow" – is a tribute to the extraordinary automotive and aeronautical design of the 1940s and 1950s. the result? An unprecedented case that evokes the fluid and aerodynamic lines of the time. Despite its striking exterior, MB&F founder Maximilian Büsser described the HM9's internal movement as "the most beautiful movement ever created." The next step was of course to enclose the movement of the HM9 in a transparent sapphire glass shell. 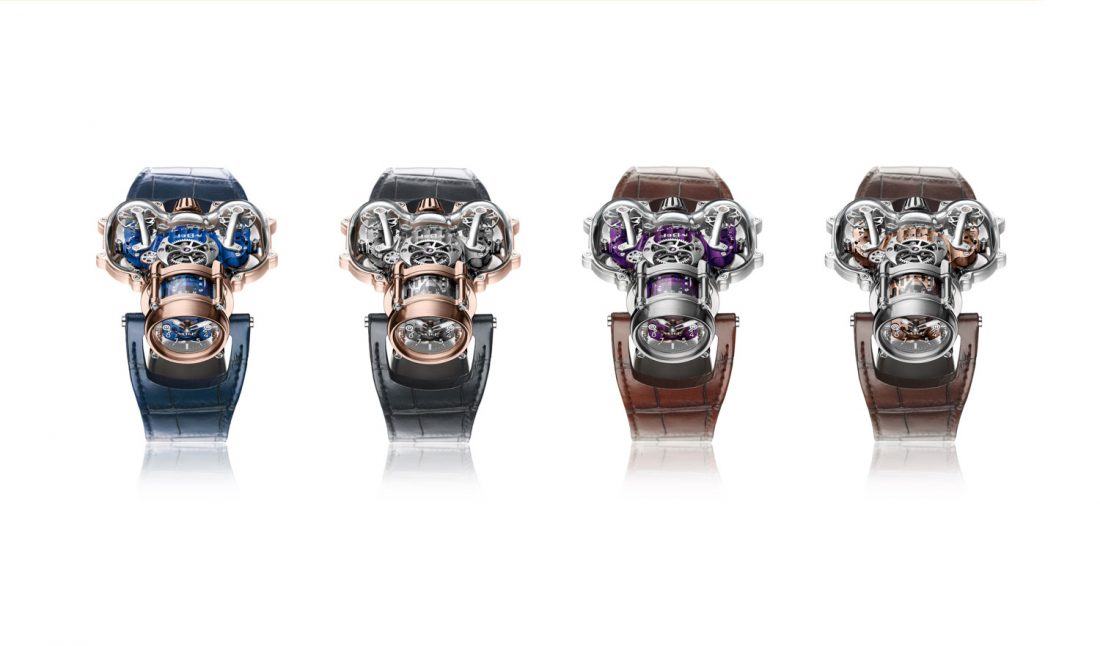 An external body made of sapphire glass and precious metal, curved, rounded and precisely mounted in three parts, is sealed with a proven combination, based on a patented three-dimensional gasket and a high-tech bonding process. Two completely independent cantilevered barbells channel the data into a differential that transforms two beats into a single coherent time pulse. Ultra-precise tapered gears effectively operate motion energy and information current across a 90° angle to provide time indication on a sapphire glass dial, marked with Super-LumiNova. 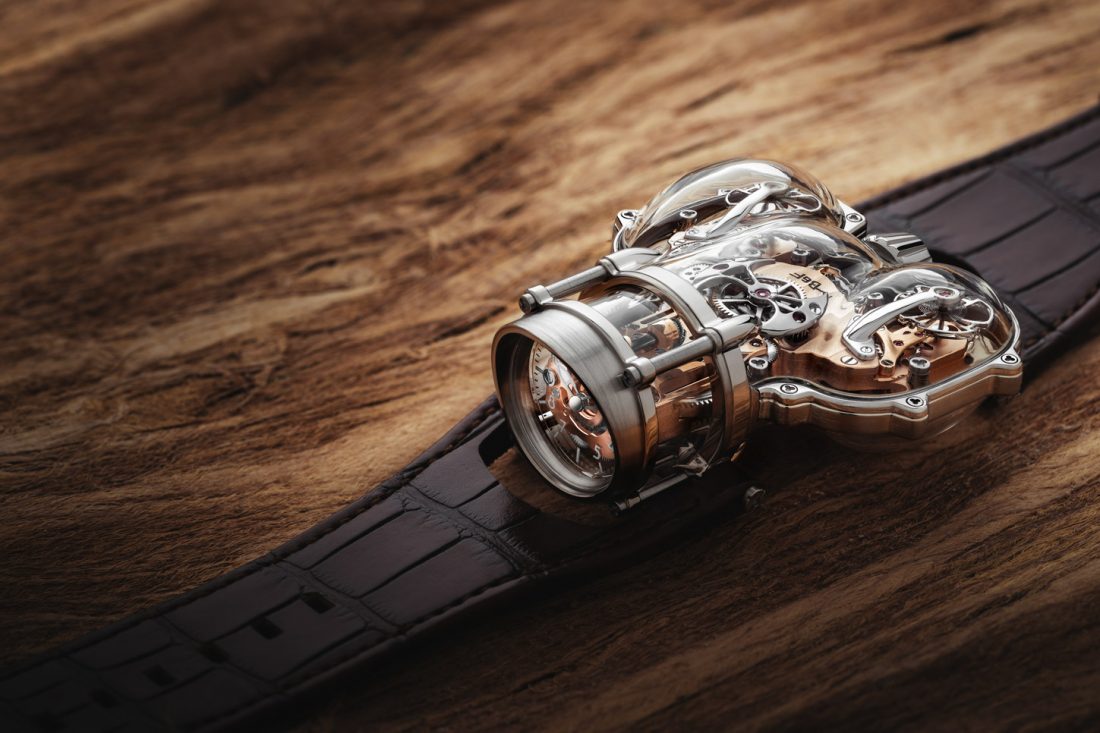 On the reverse, under each barbell there are coaxial propellers: twin turbines that rotate freely as an element of pure visual interest, waiting for the beginning of a new type of exploration. Two years after the first editions of the HM9 Flow "Air" and "Road" conquered land and sky, the HM9-SV takes us into the deep ocean – the last kingdom on Earth that still holds countless secrets to unravel. In front of us is an Atlantis exploration ship, powered by divergent technology, which appears both familiar and alien to our eyes. 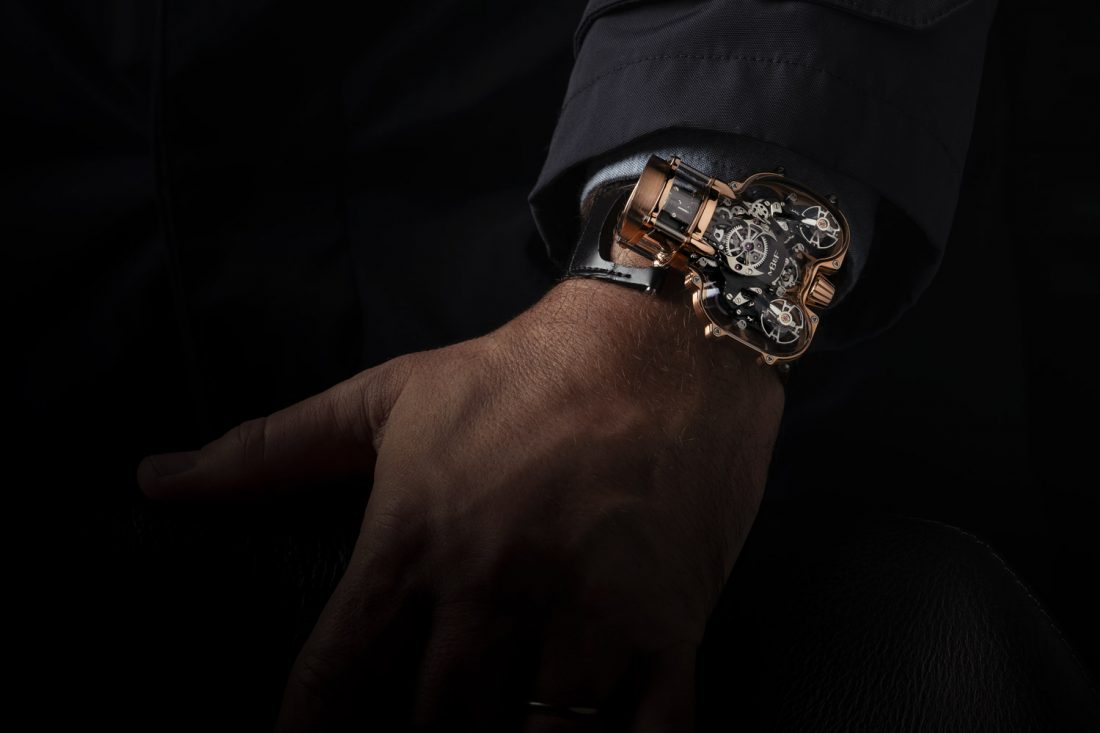 Outside, the lines of the HM9-SV follow the model of its predecessors called "Road" and "Air". The laws of fluid dynamics remain dominant in its design, although the centrality of hydrodynamics allows the HM9-SV to adopt a softer style than the inner treble angles and parabolic curves of previous Flow versions. From a technical point of view, the reworking of the dimensions was necessary to justify differences in the material properties of sapphire glass which, although extremely hard, risks breaking sharply under pressure, while a metal can at most deform. The softer lines of the HM9-SV minimize potential areas of mechanical vulnerability, while reinforcing the aesthetics of ocean dwellers. 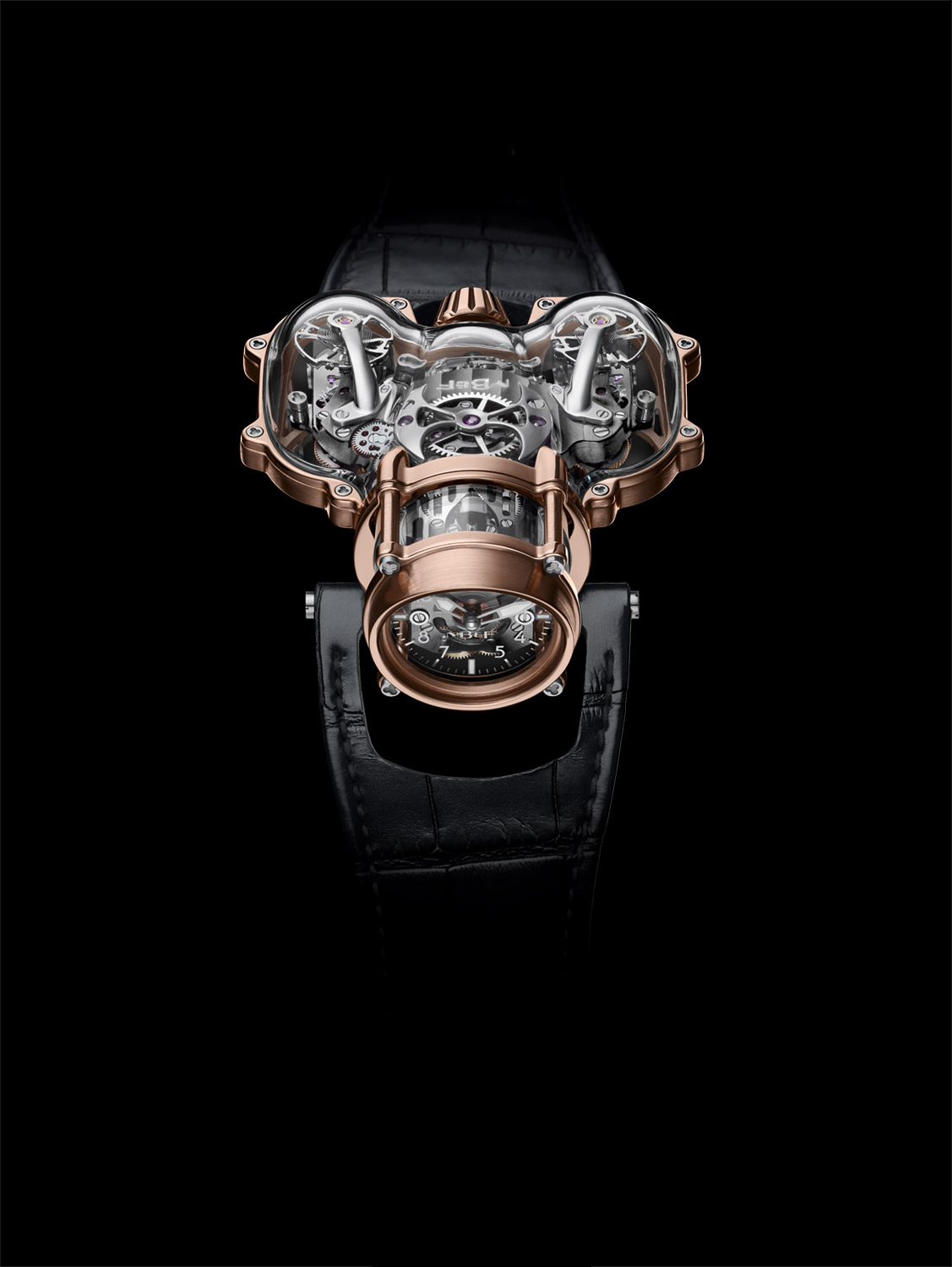 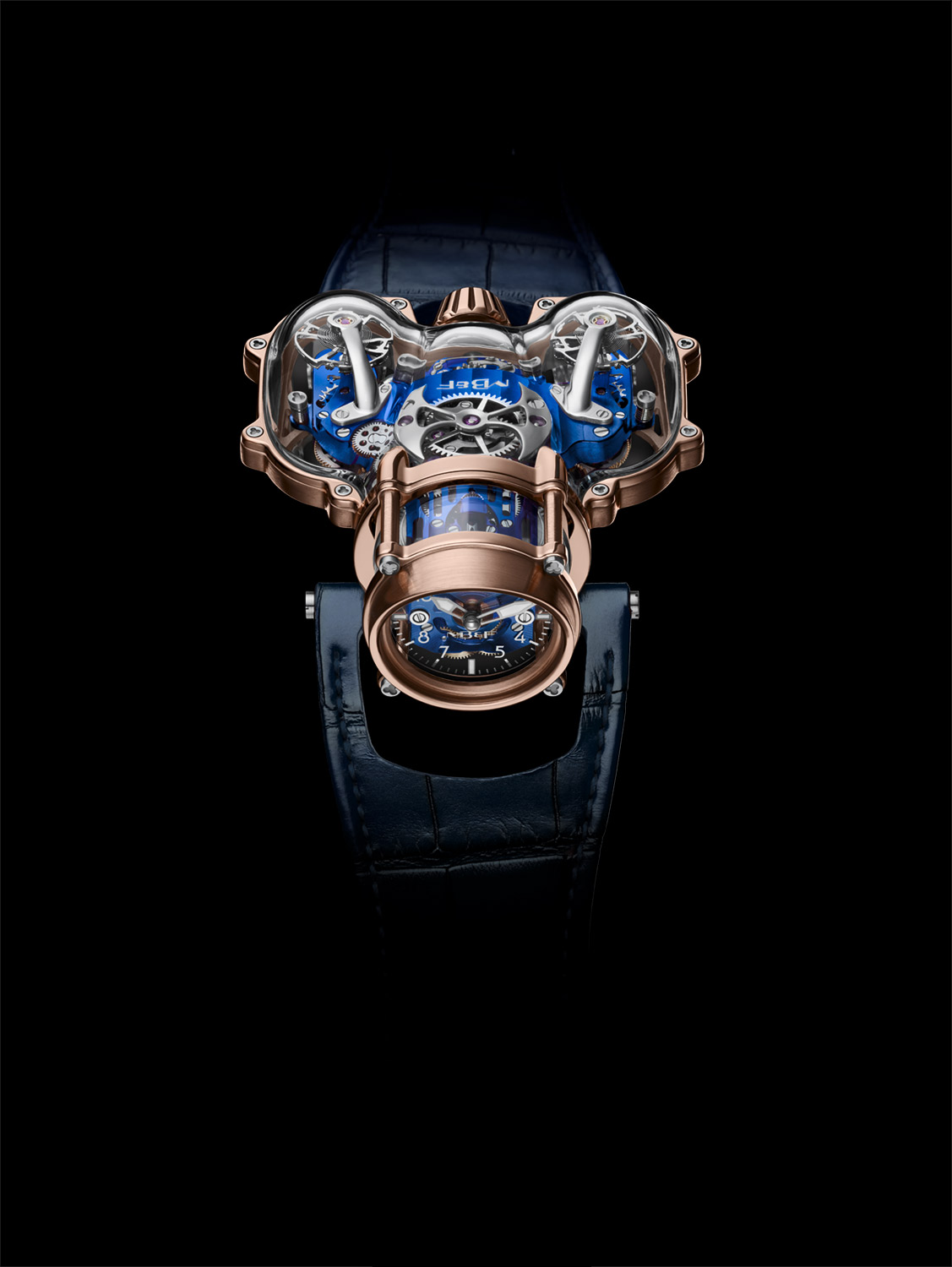 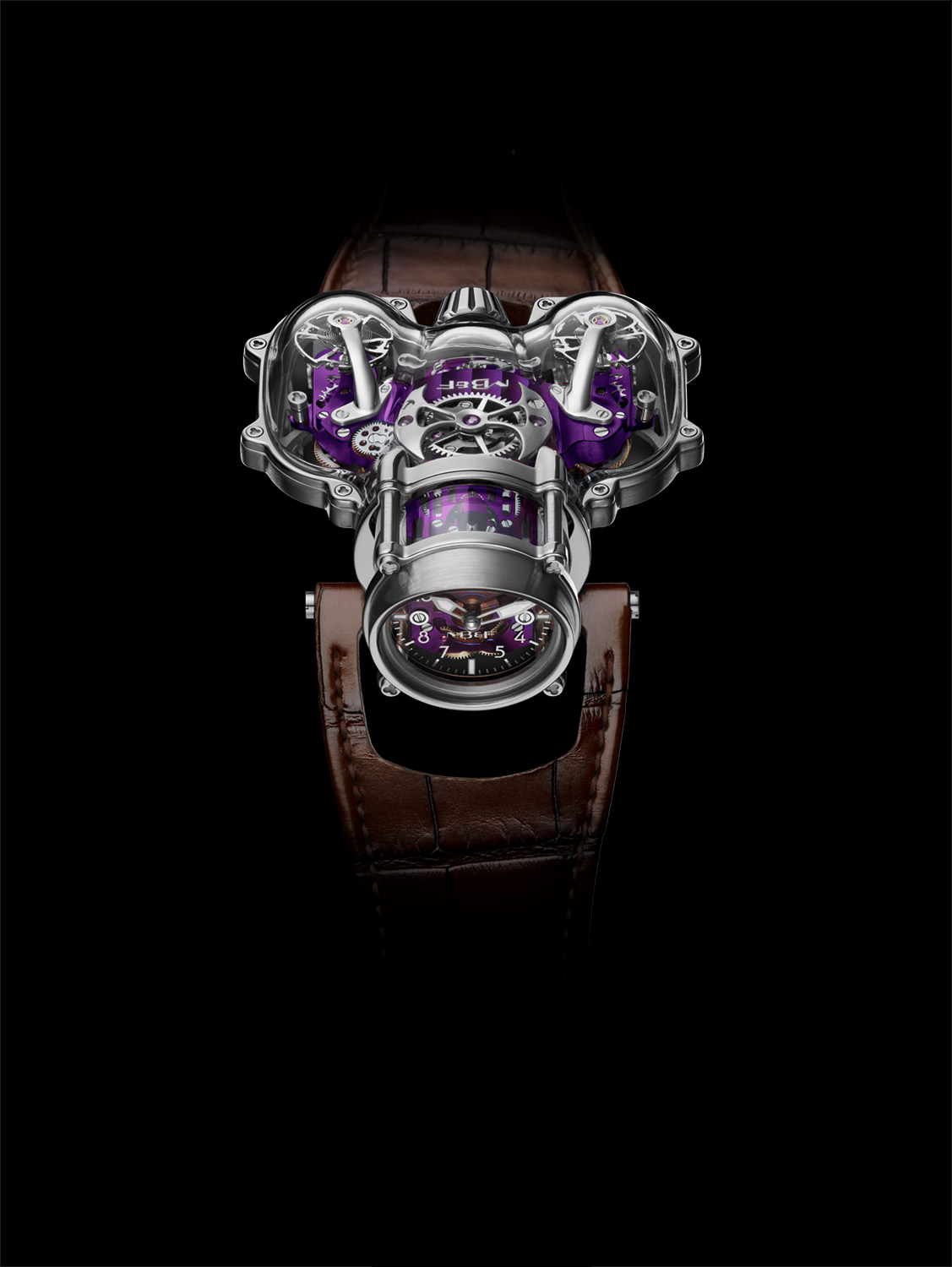 The movement of the HM9 follows in the footsteps of the movements of Horological Machines N°4 and N°6, setting aside the conventions related to the construction of the movement. Its three-dimensional assembly of ruotisms, gears, plates and bridges takes on unexpected shapes that animate the dynamic external case, creating a pulsating union of mechanical bowels and endoscheleter in a crystalline body. The traditional barbell frequency of 2.5 Hz (18,000 a/h) may seem curiously anachronistic in a modern clock, but the shock sensitivity associated with lower beat frequency is offset by the presence of two barbells instead of one. Statistically, two identically calibrated systems offer better average reading than a separate system, which could deliver abnormal results for countless reasons.

To further reduce shock sensitivity, HM9-SV editions are equipped with a new shock absorption system: helical springs positioned between movement and case. The springs are laser made from a solid polished stainless steel tube, which offers excellent elasticity and limited lateral displacement. To be responsible for averaging the time scanning transmitted by the twin barbells of the HM9 movement is a planetary differential, the movement gear, which then provides a final reading to be displayed on the perpendicularly oriented dial. This complex mechanical calculation was partly revealed in the original HM9 Flow, with sapphire glass domes set on each barbell and with a magnifying glass panel mounted above the planetary differential, to visually emphasize the importance of its chronometric role. In HM9-SV, every aspect of the movement invites discovery; the eye can follow the interaction of the components, from the barrel to the barbell, from the differential to the dial. 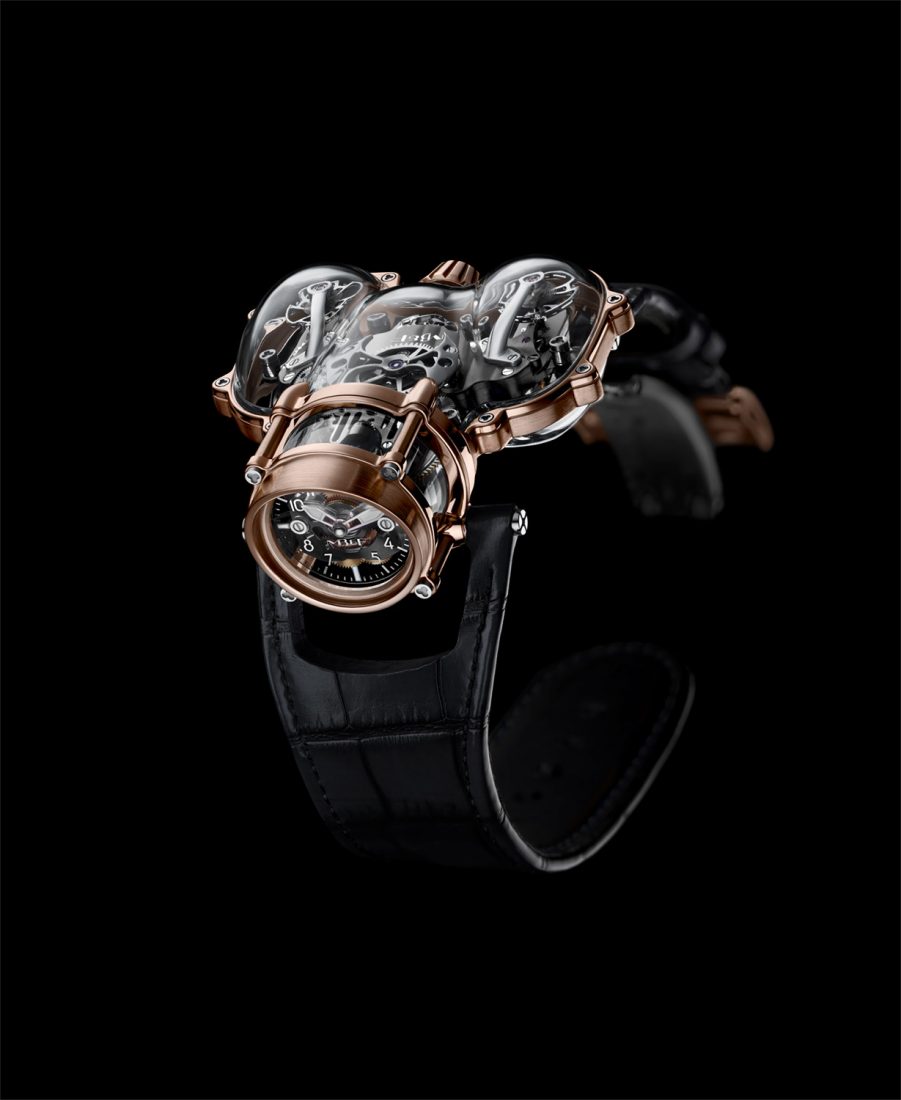 To seal the external sapphire glass components in a single watertight case, it was necessary to think about new solutions. In the original HM9 Flow, a patented three-dimensional rubber gasket had already been used to ensure water resistance when the tripartite case was assembled together. In the HM9-SV the 3-D gasket remains, but sapphire glass is fused with the metal frame thanks to a high-tech bonding process, based on an excellent internally developed method that exploits vacuum and high temperatures. The result is a water pressure resistant seal of 3 ATM (30 m), despite the virtually invisible joints between the sapphire components and the minimalist 18-carat gold frame. The HM9 Sapphire Vision is available in four editions, each limited to only five pieces: two editions with an 18-carat red gold frame, combined with a movement covered in black NAC or blue PVD; and two editions with an 18-carat white gold frame, characterized by a movement covered in purple or red gold-plated PVD.

Corundum, commonly known in its shape as a gem as sapphire glass, is one of the hardest minerals known to humans. Its hardness is exceeded only by a few other materials, in particular diamond (crystalline carbon), which enjoys a score of 10 on the Mohs hardness scale, while the corundum has a score of 9. This exceptional hardness means that the sapphire glass of the watches is practically scratch-proof and offers unbeatable material integrity and legibility in the long term, as well as imparting a level of prestige not associated with standard silicate glass or transparent polycarbonate, the two most common alternatives to sapphire watch glasses. 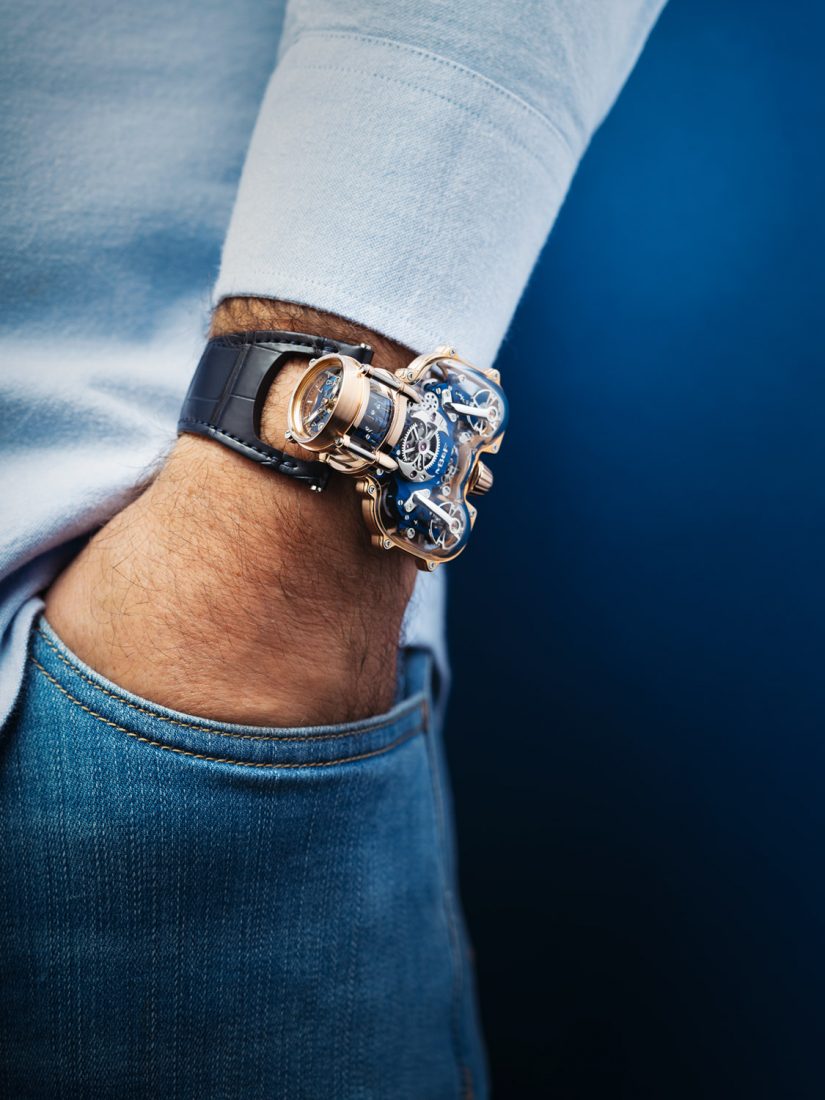 At the same time, this also means that sapphire is extremely demanding to work in complex three-dimensional shapes, a challenge made even more difficult by the reduced processing tolerances needed in watchmaking. From its first creations to today, MB&F has worked with increasingly complex sapphire glass components: the HM2 "Sapphire Vision", the dual-curvature glass of the HM4 "Thunderbolt", the recent HM3 FrogX and the hallucinatory body of the HM6 "Alien Nation" are perfect examples. Glass preparation for a single HM9-SV case requires about 350 hours of careful processing and sanding; weeks of work that would be greatly extended if it were not for the 16 years of experience that MB&F has accumulated in overcoming the limits related to the design of sapphire glass from 2005 to the present. 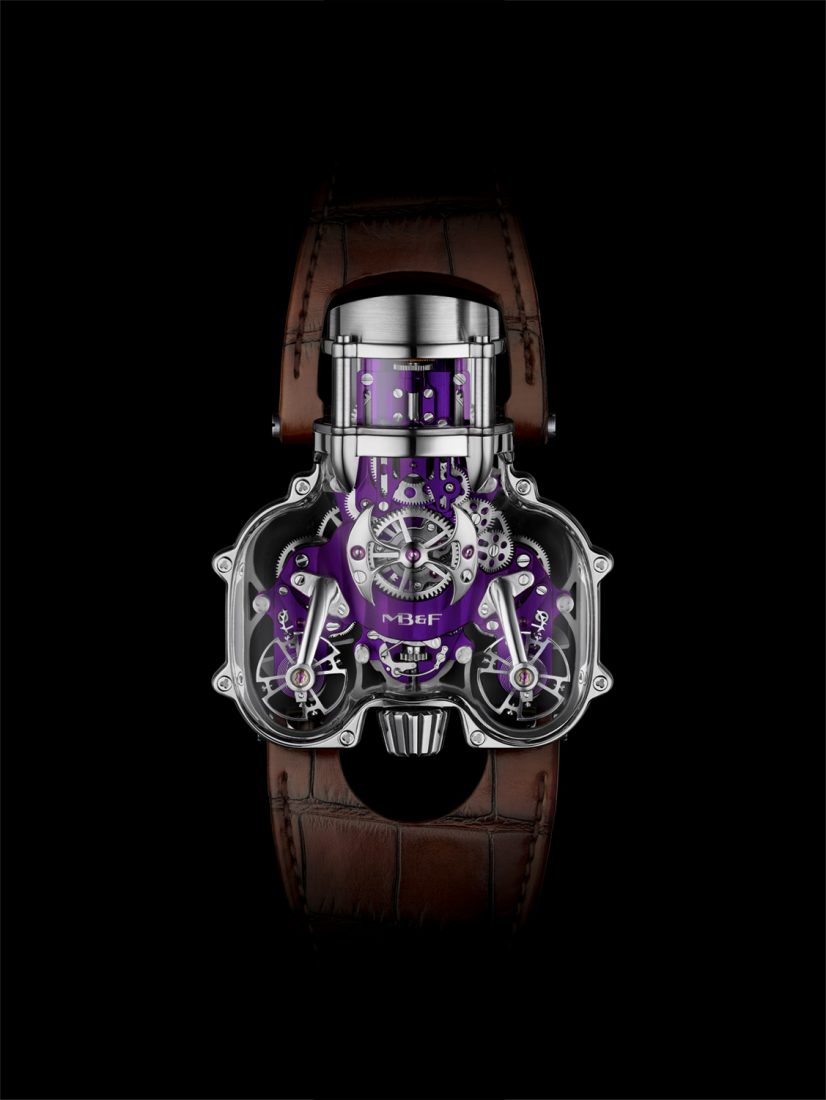 The result of three years of development, the HM9's movement has been conceived and assembled entirely in-house, thanks to the experience accumulated so far with the 18 different MB&F movements. Longtime mb&f tribe members will recognize the mechanical pedigree of the HM9's movement. Its double barbell system with differential derives from the similar mechanism used in the Legacy Machine N°2, although in a distinctly different aesthetic form. While the LM2 emphasized the purity of design and the hallucinatory effect of its suspended oscillators, the HM9 is exultant in its celebration of expressive design. Two barbells that beat within the same movement inevitably elicits a resonance effect, the mechanical phenomenon that describes oscillators connected in a state of harmonious mutual excitation. As with the LM2 movement, the Horological Machine N°9 deliberately avoids inducing the resonance effect. The goal of including two barbells is to obtain discrete sets of chronometric data that can be translated by a differential to produce a stable average reading. This objective would not be achievable with two barbells oscillating perfectly in phase, which offer the same chronometric data at all times.

Adjusting twin barbells is already a challenge in itself. Industry standard equipment used to adjust the set of a barbell uses sound emitted by an oscillating barbell to measure the frequency of beats. Since the movement of the HM9 has two sets of barbells operating at the same time, creating two sets of sounds, this method does not work in this case. Each specimen of the Horological Machine N°9, first launched in 2018, had to be adjusted by first locking one barbell to adjust the other and vice versa. Once both barbells were operated, the calibration shifted slightly, making it necessary to lock and adjust the barbells again several times before obtaining an optimal chronometric result. 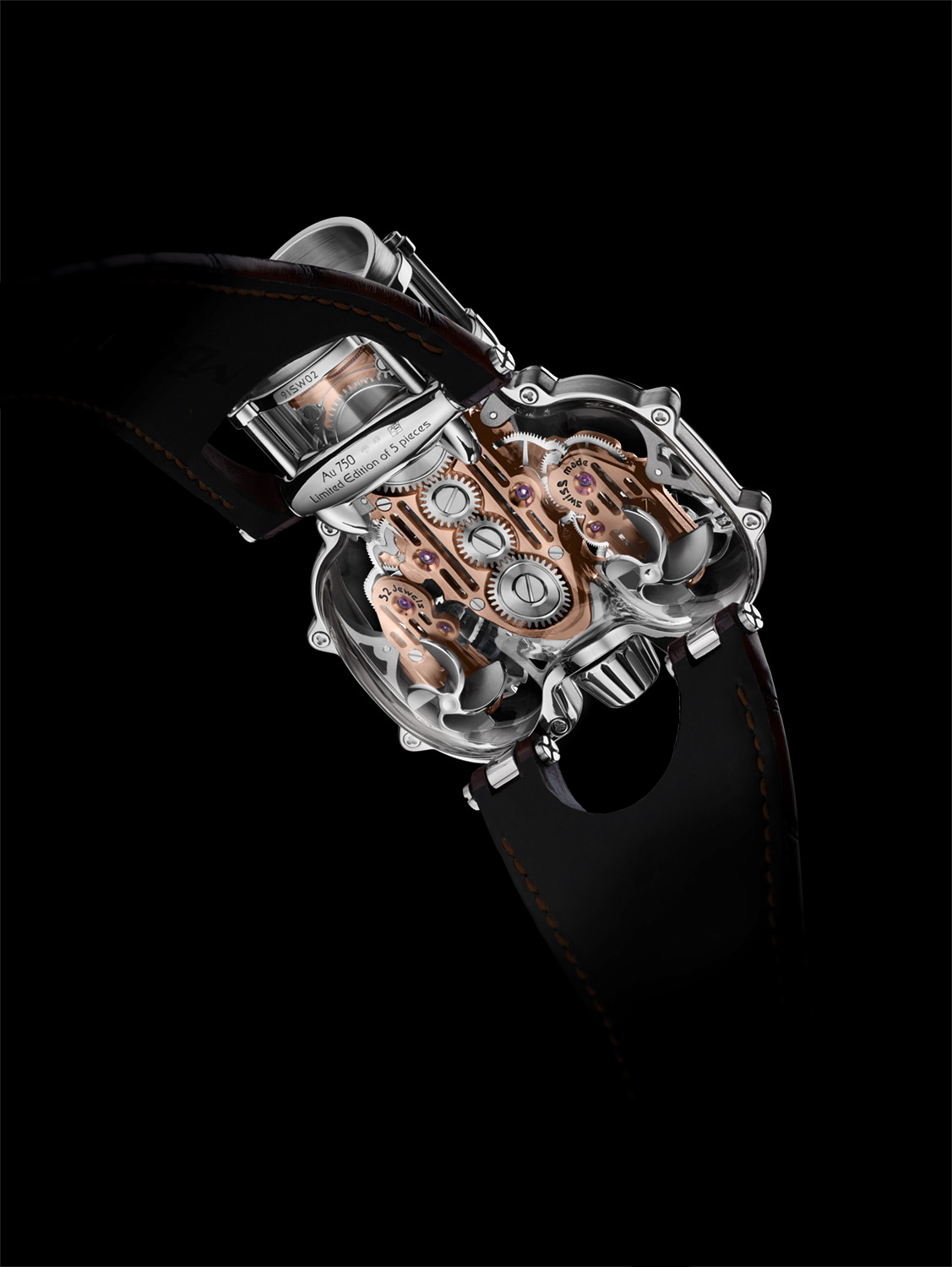 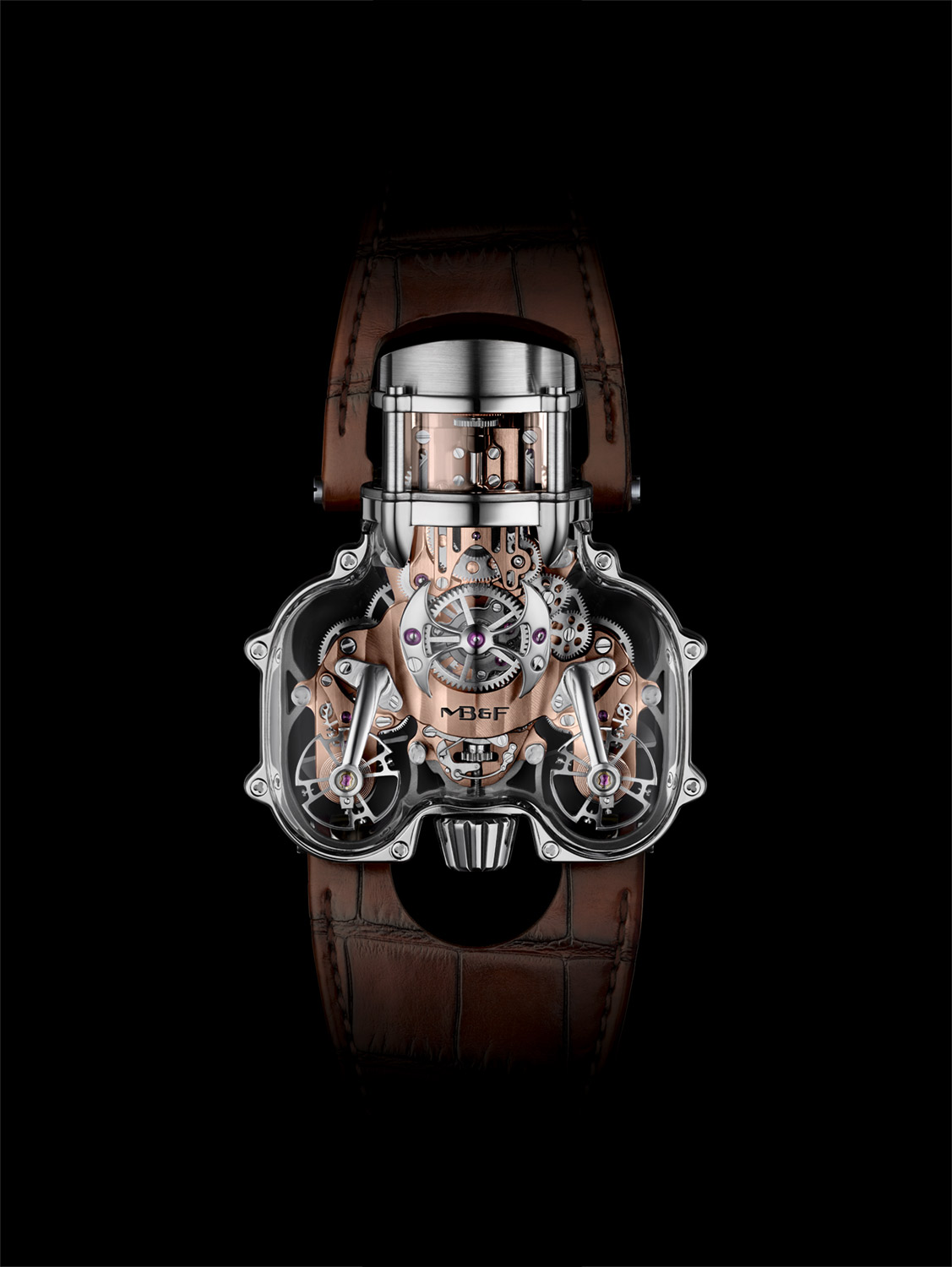 Since then, the MB&F team has made significant progress in time adjustment techniques, mainly due to the experience gained during the creation of the Thunderdome Legacy Machine. HM9-SV has thus benefited from a few more years in terms of specialist experience in this field: it is not much in terms of time, but it is measurable in terms of know-how.